welcome to Madden NFL 15 Tips, Basic Skills and Tutorials in which we take you through the game and show you some of the basic mechanism of the game. From Playing better offense to defense and special teams to help you become a better Madden 15 player.

Madden NFL 15, has made massive steps to improve the defensive side of the ball and make playing defense more entertaining than ever before. You will be able to use new tackling mechanics, pass rush moves and snap-jumping abilities to disrupt the offense, and new defensive cameras show the game from a whole new perspective. Let take a look at the Madden NFL 15 Tips, Tricks, Tutorials and basic training skills.

New this year is a cone which appears in front of defenders whenever a ballcarrier is within range of a tackle. This visual aid helps players understand when they’re in position to make a play, leading to more consistency and fewer missed tackles. The wider, darker section of the cone shows the effective range of a conservative tackle, while the smaller, more brightly-lit section denotes where an aggressive tackle or hit stick move is likely work. In addition to the traditional method us using the right stick for hit stick plays, it’s also possible now to press square (PS4) or X (Xbox One) to perform the same aggressive move. Players can use LT/L2 to “square up” in the open field when preparing to make a tackle. The cone can be toggled off and on, and is defaulted to on for the Rookie, Pro and All-Pro difficultly levels.

Traditionally, a majority of Madden NFL players have preferred to play the game as either a lineman or a blitzing linebacker. The problem has always been that once you are engaged by a blocker it’s very hard to get off the block and make a play. This year several new mechanics have been added that give you the opportunity to shed blocks, get into the backfield and cause a disruption. For instance, power and finesse moves have been moved off the right thumbstick and onto the face buttons, and you’ll be able to see a prompt over the players’ heads when power or finesse moves are available. Those who prefer a traditional experience can turn these prompts off.

First is the ability to attempt to jump the snap by pressing RT/R2 at the snap of the ball. Successfully timing a jump will allow a defensive lineman or linebacker to gain the upper hand against a blocker, increasing the defender’s chance of executing a successful rush move. Mistiming the jump can cause a defender to become unbalanced, making it harder to attack the ball and increasing the chances of being blocked or pancaked by an offensive lineman. On offense, players can utilize the fake snap command (RB/R1) to attempt to goad a defender into trying to jump the snap and thus potentially drawing an offisdes penalty.

When engaged with a linemen defenders can attempt to steer the lineman in an attempt to either clog up a running lane or shift the opponent’s weight in a specific direction. Shifting weight is beneficial as it greatly increases the chance for a defender to execute a successful power or finesse move. When engaged, arrow indicators will appear showing which direction you are steering the blocker, and a button prompt will appear over the head of a defender when he has a lineman off-balance and a pass rush move has the best chance of success.

Zone coverage has been enhanced this year so players in the defensive secondary more smartly patrol their assignments and are more dangerous than ever when attacking the ball. Top defenders such as Richard Sherman and Patrick Peterson are better able to read a quarterback, and will react to the throw as soon as the QB locks his shoulders and begins his throwing motion rather than once he releases the ball. This skill is only available for the most elite defenders, but it makes these already dangerous foes all the more deadly. Furthermore, overall coverage AI has been enhanced to play the correct position in zone coverage, and defenders are better able to identify which receiver to cover at a given time and when to hand off an assignment to a teammate.

In previous editions of Madden NFL quarterbacks would either execute perfect passes that were right on the numbers, or significantly off-target throws that landed way out of bounds. This caused an exploit where players were able to utilize less accurate, highly-mobile quarterbacks to pressure the defense in unrealistic ways. This year more variety has been introduced in pass accuracy, creating a notable difference when playing with highly-accurate QBs such as Peyton Manning or Tom Brady as opposed to less accurate players like Geno Smith or Blaine Gabbert. In addition to inherent skill, QB accuracy is also affected by movement and pressure, so a player standing tall in a clean pocket tends to see better success than a scrambling QB who is facing heavy pressure.

The introduction of less accurate throws has also unlocked a substantial number of new catch animations, which inject a welcome dose of variety in the passing game. Receivers and defenders will also sometimes attempt to make a play on a clearly uncatchable ball, much like you see in an actual NFL game. These “effort catches” add another layer of realism, creating a new wrinkle of human-like behavior in Madden NFL 15.

Players now have the option to cycle to new defensive cameras before the snap of the ball which rotates the camera so it sits behind the defense. Rather than attempting to read a play from the wrong side of the ball, this new viewpoint places the camera over the shoulder of the controlled defender. From this view, it is easier to see which way the offense is moving, where the blockers are going, where holes are forming and what route the running back may take through the line. During pass plays, the camera smartly pulls back while continuing to track the ball in flight, allowing for seamless switching to the nearest defender and minimal play disruption. Those who wish to focus on a specific player can also turn on a defensive player lock camera, keeping that individual centered onscreen for the duration of the play.

Destiny How to Complete The Undying Mind Nightfall Solo 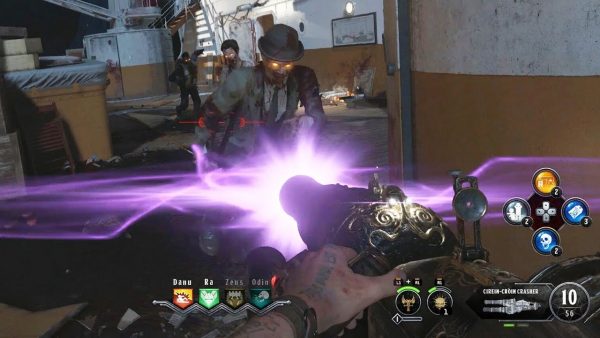