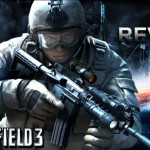 The Story is set in 2014 where Sergeant Blackburn has mentioned to the US Government that the PLR are planning a terrorist attack on New York city and Paris and that Salomon the antagonist of the story is involved in it.  Blackburn is asked how does he know and how sure is he about this terrorist attack that is being planned. Blackburn then takes us 9 months back and tells us how he knows.

At this moment he is briefed about his missions that the PLR insurgents have crossed over from Iran to Iraq and he with a five man squad are sent on a mission in Iraq to locate and safely return a US Marine squad that was investigating a chemical weapons site.

The game starts of with your last mission but you don’t see the ending,  where Blackburn is on a New York city train chasing after Salomon who is proceeding with his evil terrorist attack.

In the Single player mode you will play as Blackburn who you already know his story, Sergeant Miller playable in the tank missions and Dmitri a Russian undercover agent attempting to stop PLR plans from detonating the bomb in the heart of Paris, you will go through all the intense missions across land sea and air.

While playing the single player mode which only took me 5 hours in total if you take out breaks, I was left wanting more not because the missions were so captivating but due to them being so short. I played the game on hard and you can believe it only took me 5 hours to complete the single player campaign mode. This was such a let down. I expected for the missions to be longer and more hands on like taking out bad guys with your fist , there is one mission and the objective was to deactivate the bomb by cutting the red wire. In this scene you are left as a spectator when Blackburn is fighting the guard, man for a second I taught I was going to fight this guy but I was disappointed.

The controllers are an improvement from the previous battlefield game, weapons responsiveness are good but a little jumpy when using certain types of guns but I got use to them as I completed each mission.  Even though the missions where short but having the options of fighting on land, air and sea made each mission so much fun to play. The Co-op mode is much more enjoyable as you play with a buddy and take on different types of objectives together, the mission are linked to the single player mode.

In the multiplayer you will have 64 pc gamers and 24 on the console, It will take you months to be able to get all the unlockables but for more information on the multiplayer and classes head over to gamerfuzion and check out all the guides and tutorials for noobs and advanced players.

Some sceneries took your breath away, specially one where you are about to board a fighting plane and you admire the ocean and its beauty, but the game comes with too many glitches, specially while you are shooting. I was using the sniper gun and you will notice in the walkthrough that it froze on me for a second or two, same is with other weapons throughout the campaign and on some sections of the game the console did not handle the graphics well.

The destructive feature is more realistic as you are able to see buildings crumble to pieces  and for me personally the sound was better than the graphics, even after installing the HD assets. I played the campaign with the audio of my TV and then my PX5 and the sound quality that comes out from the PX5 is unmatchable and sucks you in. There is one mission where you are on foot and you hear the sound of the rain and sounds so realistic.

I was playing the game on hard mode and noticed that the AI is not that bright, at times I was very close to the enemy AI and they were not attacking me at all. Big let down.

Now lets see the pros and cons of Battlefield 3:

Pros: Audio, Graphics, you are able fight on foot, vehicles, air, water so many options it does not make the game boring at all.

Cons: too many Glitches, especially when shooting a sniper gun and other guns throughout the campaign. Short Missions.

As a first person shooter game I have to say it almost reached the status of call of duty games but we have jet to see modern warfare 3, Just for the single player campaign the game is not worth it as is too short and it takes only 5 hours in total to complete. Let’s  just hope that the multiplayer mode makes up for it in all aspects.

Gamerfuzion gives Battlefield 8 out of 10