The Assassin’s Creed III Boston Walkthrough Demo will guide you through the gameplay action in which is being narrated by creative directo, Alex Hutchinson. In this walkthrough it gives the games an insight of Boston city during the 18th century and how Assassin’s Creed III looks in cities of Colonial America.

The Assassin’s Creed III Boston Walkthrough displays the new action pack combat mode that was built from the ground up along with the feel of new features from the sneak mode, interacting with people around him and mimic what they are doing. 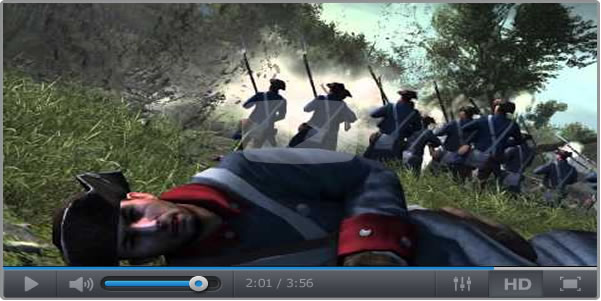 Some of the weapons you will be able to use and which you can see in the video here are players can dual wield weapons, while fighting and stealth have been completely overhauled with new features, such as “double-counters,” “multiple takedowns,” and chain kills. Connor will go into battle with a wide variety of weapons at his disposal, including the knife, tomahawk, flintlock pistols, bow and arrow, and Hidden Blades.

Set against the backdrop of the American Revolution in the late 18th century, Assassin’s Creed III introduces a new hero, Ratonhnhaké:ton, of Native American and English heritage. Adopting the name Connor, he becomes the new voice for justice in the ancient war between the Assassins and Templars. Gamers will become an Assassin in the war for liberty against ruthless tyranny, in the most stylized and fluid combat experiences in the franchise to date